Two of Justin’s friends introduced us to the Taste of Madison last year – and man is it awesome! It is food vendors on every street around the Capital square, beer on ever corner, music on 3 streets, and awesome people watching. Last year we went just one day, this year we went both days Saturday and Sunday! The weather and crowd were perfect on Saturday, not too many people, not too hot – in my world it was a perfect day! We walked around the capital, watched people, ate some delicious food, talked, drank beer ( shhh! I took a weekend of of Gluten Free ) – we had a great day being with each other. Relaxed, chatted and laughed – reconnecting as a couple. We had planned on checking into our hotel room, then heading out to a local bar to watch the Badger game …..but ….. we got too comfortable and I had HGTV on…..so we ended up going to bed early.

OH ! Before we headed down to the Taste we did a little shopping! We have been in need of a new couch – BADLY! So we stopped into Slumberland and sat on pretty much every couch they had. Returning back to the 2nd  one we sat on – and a salesman cam by after sitting and chatting for a few minutes. He was a great salesman – because he treated us like people not people he wanted to make money off of. After 15-20 minutes of friendly conversation we finally get to talking about buying the couch! Yes we bought a couch! YAY! Now we just have to get it delivered —

Sunday we met up with some of Justin’s friends and his family at the Taste – it was a lot busier that day. A LOT more people, it was so hot you just had to stand their and sweat. The upside to the hot – I got a little bit of a tan! I am usually the same pale pale color year round – I don’t get much color. Well that is because I sit inside by the window most of the time. And when I do go outside I where long sleeves or a cardigan – yup sometimes no matter how hot I am I will still wear that cardigan! What can I say I LOVE them! So yea I came home with an actually tan line! It may be a farmers tan line but still a tan-line non the less! This day was a little different, we went into a few pubs to get out of the heat – talked about nonsense (which is needed sometimes 🙂 And again ate some great food!

I tried fake vegan bacon – on accident – and may I say you vegans are missing out for sure! Vegan bacon is not yummy at all – not at all – just saying! Curd Girl for sure had the best Cheese Curds!

If you have not been to the Taste of Madison — you MUST go next year! Take a day off during Labor Day weekend and head down there for some great food and some great music! I didn’t bring my camera with, because I wanted to be present while with Justin, and not worry about my camera getting hit by people, or possibly stolen. So the only photos taken were with my phone. But memories all the same!

Yes we did not want to get out of bed – we even had the cleaning crew knock on our doors a few times! No we don’t want to check out we want to move in!

OK that sign has us giggling every-time! Yes we are teenagers at times. 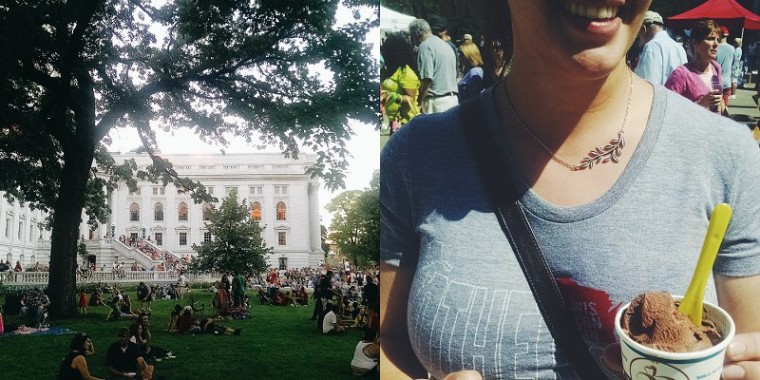 The thing I love most about the Taste is that there are so many people just sitting and relaxing while having a drink and listening to music all around the Capital building. The only time of year that I ever see this. It’s pretty darn cool! 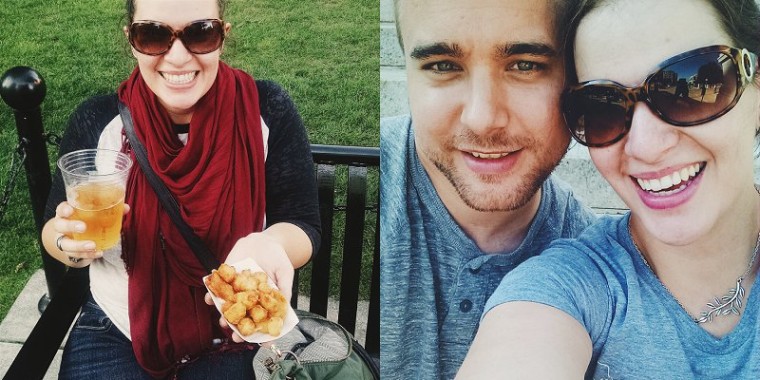 Remember to get out there, do something new, and experience life’s adventure! We are leaving on a weeks vacation next week – we aren’t really planning much just getting in the car and going! If you have any must see’s in Northern Wisconsin please comment below! We would love to hear them!

All Content Copyrighted under Natural Intuition Photography 2020
Back to Top